Even though the neversetting sun prevents the stars from being seen with a naked eye, they influence the world in subtle ways. For a fee, an astrologer located somewhere in the Central Castle can tell you what the current constellation is, or make you a personal horoscope.

The stars rotate through a cycle of 16 signs, each of them corresponding to one of the gods of the pantheon: 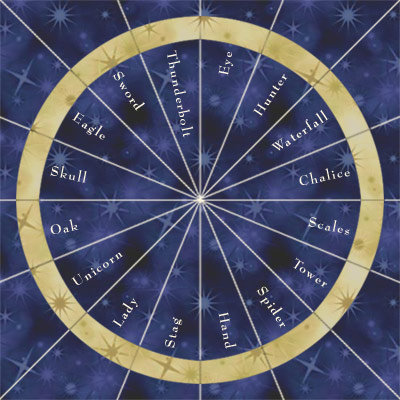 The most important relationship exists between signs that lie on opposite sides of the cycle. The two opposing signs form a so-called axis and influence similar areas or aspects of the universe:

There are also other, less important relationships between the signs, for example the Stag, the Lady and the Unicorn are generally known as the "Three Ladies" (being ruled by Selune, Freja and Mielikki respectively). The whole circle encompasses a symbolic reflection of two life cycles.

These signs are further complemented by 5 aspects, each of them under the influence of one of the so-called "wandering stars". Little is known about the true nature of these stars, except for the fact that they follow their own cycle, different from that of the signs. Each of the five stars corresponds to one of the major deities.

It is said that praying at a god's shrine at a time when the stars favour that god can bestow powerful blessings, even more pronounced for those who were born under the same sign.